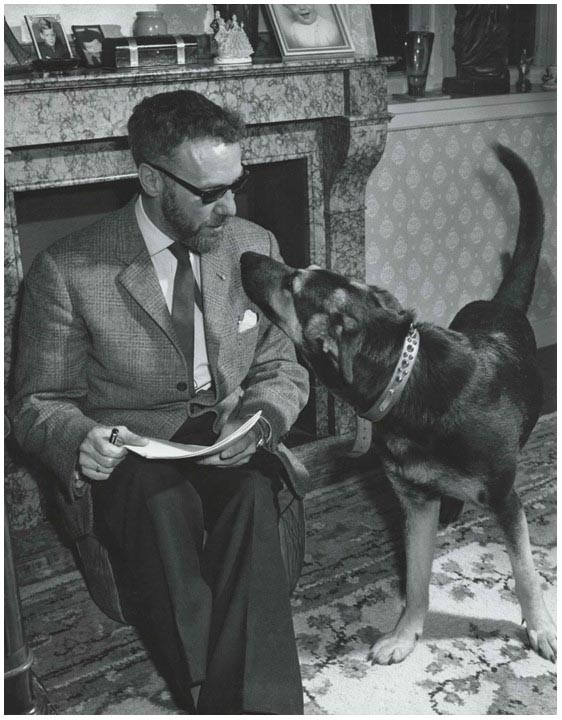 Sven Hassel was born in 1917 in the small Danish town of Frederiksborg. He was raised in a poor Danish working-class family, and it was these conditions that drove him to join the merchant navy at the early age of 14, as a ship-boy. Five years later, a now 19-year-old, Sven had completed the compulsory Danish military service with hopes of a brighter future.

However, despite his efforts he found himself in the midst of a spreading economic crisis, and surrounded by increasing unemployment. This led him to seek fortune and relocate to neighboring Germany in anticipation of finding employment there.

But even in Germany, Sven was unable to find a job and had to revert back to what he had already come to know: the military. He chose to join the German army (Wehrmacht) as a volunteer in 1938. He initially enrolled in the 2nd Panzerregiment, and later the 11th and 27th Panzerregiment (both in the 6th Panzer Division). In fact, it was an unsuccessful attempt to desert the army (you’ll find this story in the books) that got Sven to serve in the penal battalion of the 27th. It was amongst this special group of individuals, Sven encountered and befriended the colorful comrades that would later motivate and inspire his novels.

Throughout the war, Sven Hassel had gone from the very bottom of the barrel, enlisting as a volunteer, to making the ranks of a lieutenant and earning the Iron Cross, both first and second class.

One of the repercussions of fighting on the German side, once the war ended in 1945, was that he had to serve time in various prison camps as a Prisoner of War. These included short confinements at Russian, American, and French prison camps. Once released, and upon returning home to Denmark, Hassel’s German citizenship was revoked and he was initially condemned to serve 10 years for treason in a Danish prison. Finally, in 1949, amnesty was granted to a majority of political prisoners, thereby seeing their sentences reduced.

It was while serving his sentence at one of these prison camps that Hassel began to write his first book. Legion of the Damned was first published in Denmark in 1953. However, the book was not well received by the publishing industry at the time and it was rejected by a total of 12 publishers, prior to its first release. Remarkably, and to this day, it is the only Danish novel that has been sold consecutively for more than seven decades since its first edition.

Initially post-war, Hassel had the intention of joining the French Foreign Legion, like many of his comrades, which seemed to be the only option for a soldier and the only trade he knew. Fate, however, would have it otherwise as he met his future wife prior to enlisting and decided against it. This small change of fortune drove him to eventually become the writer we know of today. Hassel married Dorthe in 1951 and together they had a son a year later.

Despite having released his first novel, Hassel continued his employment at Copenhagen Free Port as a Coordinator to support his family. Authorship was still not in the cards and certainly not a reliable means of income.

In 1957 Sven fell seriously ill from a rare disease that doctors were not able to diagnose. His symptoms became gradually worse until he suffered from a near total paralysis. He had lost a dramatic amount of weight and was merely a shell of the person he had once been, only weighing 38 kg. He was forced to leave his job at the time, which in turn, left the family without earnings.

It wasn’t until he was admitted to the Bernhard Nocht Institute for Tropical Medicine, in Hamburg, Germany, (at the advice of his doctors in Denmark) that they were able to discover the source of his illness – an unusual fever originating in the Caucasus region – and thereby treat it. It was believed he somehow acquired the dormant virus while deployed to the area as a soldier in the German Army. It was because of this, that he was able to seek treatment free of charge (on an otherwise very costly and unaffordable course of medical care). Hassel made a full recovery one year later.

Shortly thereafter, his wife encouraged him to start writing again. Hassel took on the task of continuing the series with Wheels of Terror, his second novel. A few years later he wrote Comrades of War, and so it continued. He found initial success in Denmark, which led to international publishing deals. His work was translated and sold worldwide and he became a best-selling author.

In 1964, with the means now available to him, Hassel and his family moved to Spain inspired by the Spaniard Arturo Barea, one of his favorite writers. He had evoked his interest and love for Spain and its people, not to mention the better climate. From here, he completed the series.

Hassel went on to create a series of 14 World War II inspired novels, drawing from his own encounters and experiences of the war. The books take the reader on a journey following the trial and tribulations of Hassel and his comrades from the penal battalion: Porta, Tiny, the Legionnaire, Old Man, Heide, Gregor Martin, Barcelona Blom and the author himself. Amongst these, the few to survive the war were Sven, Tiny, the Legionnaire, Heide, and Gregor Martin.

Sven Hassel’s 14 novels include: Legion of the Damned, Wheels of Terror (also a motion picture), Comrades of War, March Battalion, Assignment Gestapo, Monte Cassino, Liquidate Paris!, SS General, Reign of Hell, Blitzfreeze, Bloody Road to Death, Court Martial, O.G.P.U. Prison, and The Commissar. These novels have seen worldwide success with over 53 million copies sold; are translated into 25 languages and published in more than 50 countries. In Great Britain alone, the books have sold more than 15 million copies.

Hassel’s antiwar novels portray the ordinary soldier – showing us the backside of the medals and heroics. These soldiers are not men who provoke wars, but instead are used as pawns forced to fight them. The novels are based not only on the author’s own experience fighting in WWII, but also incorporate fictional elements and plotlines, accentuated with a tremendously witty sense of humor. It should be noted that the books while based on Hassel’s experiences and those of his battalion should not be considered autobiographical nor historical documentary pieces. His hopes are to warn younger generations against the atrocities of war, stressing that war is the last resort exploited by flawed politicians.

Sven Hassel peacefully passed away on September 21st, 2012, in Barcelona, Spain, where he had been residing since 1964.

If you disable this cookie, we will not be able to save your preferences. This means that every time you visit this website you will need to enable or disable cookies again.