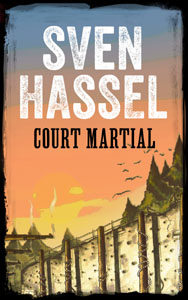 “Porta whinnies with pleasure and offers her a seat on the rotten bench we are occupying.

She laughs, the sound ringing deep into the woods. She is standing with the sun behind her and we can see her body in silhouette. Her grey summer uniform skirt is made of thin transparent material. We’d like to stay there for ever. Her hair is long and golden, like a ripe cornfield. She cannot speak German and we have to make ourselves understood in a queer kind of lingua franca. Porta speaks something he says is Finnish, but the girl doesn’t understand him.

Splashes jump out of the river. They are like raindrops.

“The loss of a leg or a foot is not half as bad. These new artificial limbs have joints which often work better than the real thing, and if you get arthritis you can cure it with an oil-can.”

Porta to Tiny, 125 km north of the Artic Circle.