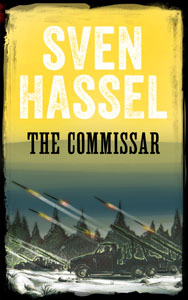 “Sven Hassel is an extraordinary storyteller.”

“Jesus, Jesus why is everybody always sneezin’ and freezin’ in this God-awful country, sniffles Porta. -Anybody know a cure for it? I feel as if hair’s growin’ out of the sides of my head, an’ the germs’ve built a barbed-wire entanglement in my throat!

– A Russian grenade up your backside, or perhaps an MPi burst straight into your napper’d clear that cold away in a second, says Gregor, with a less than humorous laugh.

– They’re a certain cure at least, the Old Man admits, scraping at his silver-lidded pipe with his combat-knife. -Colds are hell, and worst of all they’re not enough to put you in sick-bay.

– You’re right there, puffs Tiny. -I saw the MO yesterday. Threw me out ‘e did, an’ threatened to ‘ave me jailed for bleedin’ sabotage o’ the war effort.

– Where else, sir, I answered, and then ‘e went funny an’ started shouting. Off I went then, ‘fore anythin’ irregular could start ‘appenin’. I did manage to sneeze straight in ‘is face, though. Give ‘im somethin’ to think about when ‘is thermometer registers 52ºC…”