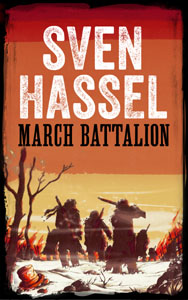 “…Sven Hassel is one of the best European novelists around, with a flair for excitement that has few equals.”

“-It was the Spanish Civil War, said Barcelona Blom, spitting casually through the open side panel of the Russian tank in which we were travelling. – I started off fighting for one side and ended up fighting for the other. To begin with I was a miliciano in the Servicios Especiales. Then the Nationalists got hold of me, and I ‘d managed to convince them I was only an innocent German who’d been pressganged into service by General Miaja, they shoved me into the 2nd Battalion, 3rd Company. And made me fight for them, instead. Though mind you, as far as I was concerned there wasn’t any great difference between the two sides in any case…In the Especiales we used to round up everyone suspected of being a fascist or a fifth columnist. We used to line’em up against the wall of the abattoir. The sand there was so dry the blood used to soak right up in a matter of seconds. No need to bother with cleaning operations…Mostly we preferred to shoot them standing up, but some of the buggers just curled into a heap and you couldn’t budge them for love or money. At the very last minute they always used to shout, “Long live Spain!”…Of course, when I got nabbed by the Nationalists it was just the same thing in reverse. Only difference was, they made us shoot them sitting down, with their backs turned. But it all came to the same thing in the end.

They still used to shout “Long live Spain!” before they died.

– Funny thing, that they all thought they were patriots. But when it came down to it, there was only one way of showing you were on the right side. You had to denounce someone. It didn’t matter who, so long as you denounced them. They never got a chance to speak in their own defense, anyway. They were always told to shut up before they’d even opened their mouths…

– Come the end of the war, we had a real problem on our hands. There was practically a five-year waiting list of people due to be exterminated. We had to take over the bull rings. Herd them into the arena and mow them down with heavy machine-guns. We had four squadrons of Moors to give us a hand. Villainous bastards THEY were…After a bit, even the police had a go. Everyone wanted to be in on the act…And when it came to it, they all died the same way. It didn’t make an atom of difference which side you were on.

There was a moment’s pause for reflection, and then Tiny spoke. In his usual forthright fashion.

– I’m pissed off with the bleeding Civil War. Didn´t they have any birds in Spain, for God’s sake?

Barcelona shrugged his shoulders and wiped the back of his hand across his eyes, as if to suppress the memories of slaughter. He began to speak of other things. Of orange groves and vineyards and people dancing in the street. Little by little we forgot the burning cold and icy snows of Russia, and a while, we felt only the sun and the sand of Barcelona’s far-off Spain.”