An Introduction to Sven Hassel’s work 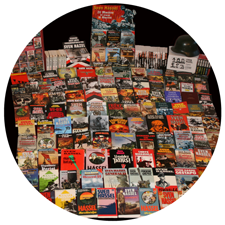 The Sven Hassel World War II classics have sold 53.000.000copies worldwide, 15.000.000of which were sold in the UK alone. Sven Hassel has been compared to the literary masters of Tjekov, Hemingway, Hasek and Homer. His work is considered a monument against war and dictatorship as well as one of the best pictures ever given of the plain soldier with his racy humour. Hassel tells us about the men, who do not make wars, but have to fight them.

This unique series is about a German platoon (Porta, Tiny, Old Man, the Legionnaire, Heide, Barcelona-Blom, Sven,etc.) on different fronts during WWII and narrates the atrocity and absurdity of war, not to mention the brutality and stupidity of the nazi regime.

The Second World War both frightens and fascinates those who don’t carry this period as an awful memory. Its history can be told in different ways: whether through eyewitness descriptions, as thrillers with the war as a background, or staged as a documentary.

Sven Hassel does not use any of these genres.He is above all a storyteller. There is no doubt about his participation in the war on the German side. But even so, Hassel does not give us an eyewitness description. A great part is based on his own experiences, but portions are also based on his comrades’ stories and as Hassel says, on the author’s legitimate right to use free fantasy.

It is the small melted group of soldiers, Hassel narrates about, a brutal and talkative collective, whose view on life is no further than their chinstraps. Sven Hassel gives, however, a picture of the war as a way of life and at the same time as a meaningless madness.

For the private front soldier in the Wehrmacht the only thing that matters without false hope is to survive,and to do so, the raw and cynical humour of Sven Hassel’s characters is a tremendous help.

Sven Hassel uses short sentences and chapters giving his writing a powerful dynamic. The reader isn’t simply reading words or sentences. The reader is visualizing what the author depicts. Hassel’s writing has strength, expressiveness, a certain ease to touch the reader mixed with a tremendous sensibility to describe the barbaric nature of it all, and last but not least, a healthy dose of humour!

Hassel shoots straight to the point. He doesn’t waste his time with superfluous descriptions but when he does, he uses subtle brush strokes. The action itself supersedes the description. In the literature of the 20th century, narration predominates over description. Therefore, novels frequently – and Sven Hassel is an example –gain strength, power and above all rhythm. This rhythm – understood as cinematographic rhythm – is what predominates over the action. But the dominion of the tempo of a novel is only within the reach of few authors. And Sven Hassel is one of them.