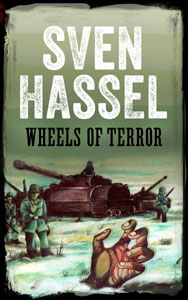 “This is a book of horrors, and should be left alone by those prone to nightmares. Sven Hassel’s descriptions of the atrocities committed by both sides are the most horrible indictments of war I have ever read…A great war novel!”

“It was cold and as we had very little fuel, Porta suggested we should play “arse-slap”. As the name suggests, one man bent over so that his trouser seat was taut. One of the players standing in half-circle round him had to give an almighty slap behind, and then he had to guess who had hit him. If he was right that man was in.

Even if you used all your strength it was impossible to hit Tiny so that he noticed it. He pretended he did not even feel it.

– Blimey, you’d think it was butterflies bumping against me, he grinned.

– Why the hell can’t you white livered rabbits put some strength into it!

When Tiny wasn’t the target, he always wanted to slap, with the result that the unlucky man who was “in” was sent flying several meters forward.

Tiny’s turn coming round again, the Little Legionnaire found a plank with a nail at the end. He winked as we stood round the expectant Tiny who laughed mockingly at us….”