Legion of the Damned – Comic Book One 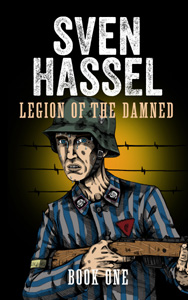 “This is the description of those men, who do not plan or cause wars, but have to fight them…”

– I shall tell you, dear fellow. If you are a Party member you will obey the Führer’s commandment that the good of the whole comes before that of the individual. And therefore, you will say something like this: “Brave warriors of the 27th Fire-and-Sword Regiment! To help you to fight even better for Führer and People, I, in my gratitude, will make you a gift of the bottle of rum that Herr Joseph Porta, by God’s Grace Obergefreiter, in his infinite goodness wished to give to my unworthy person. Wasn’t that just what you were wanting to say? Weren’t those very words trembling on the tip of your tongue? Dear fellow, we thank you from the bottom of our hearts, and now you may fuck off!

Porta flung out his hand with a magnificent flourish, raised his cap and shouted, “Grüss Gott!”

As soon as the wretched Nazi railwayman had gone, furiously gnashing his teeth, we opened the parcel. There were five bottles of wine, there was a whole roast of pork; there were two roast chickens, and there was…