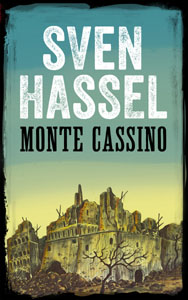 “The splendidly described scenes are at the level of Homer’s representation of the battle of Troy.”

“God! how it rained! It poured and poured. Everything was sopping. Our mucky rain-capes were long since wet through. We were sitting under some trees in a sort of tent made by buttoning capes together. They were SS capes and better than ours and were relatively dry. Tiny had also put up his umbrella.

We had finally got the stove from the big house burning and we were getting ready to dine. We had forty starlings which we were roasting on long sticks, and Porta was making marrow-balls. It had taken us two hours to scrape that marrow out of the bones of two dead oxen. We had found some fresh parsley. Gregor Martin knew how to make ketchup, which he was mixing in an American steel helmet. Steel helmets were practical things, capable of being used for lots of purposes. The only thing they were useless for, was the purpose for which they were made.

Suddenly, we burst our laughing. It was Tiny’s fault. He had made a classic remark without realizing that it was classic.

Then Porta held up his yellow top hat and announced that we were to inherit it, when he died. And we bellowed at that.

Then by mistake Heide pissed into the wind, and we rolled about with laughter, and we were still laughing as we ran back with our food between the bursting shells.

Once I heard a padre say to one of the staff officers:

That was the day we were laughing over Luisa Fatarse’s knickers which Tiny was wearing tied round his neck, and I swallowed a piece of potato the wrong way and had to have my back pummeled with a hand grenade. Laughter can be pretty dangerous.

– If they didn’t laugh as they do, the staff officer replied, they would not be able to carry on.

Porta had a masterly hand with marrow-balls. He made only ten at a time, otherwise they went soggy, eating own share in between. We ate over 600 between the nine of us, which is quite a lot, but then we were all night at it.

God, how it rained!”